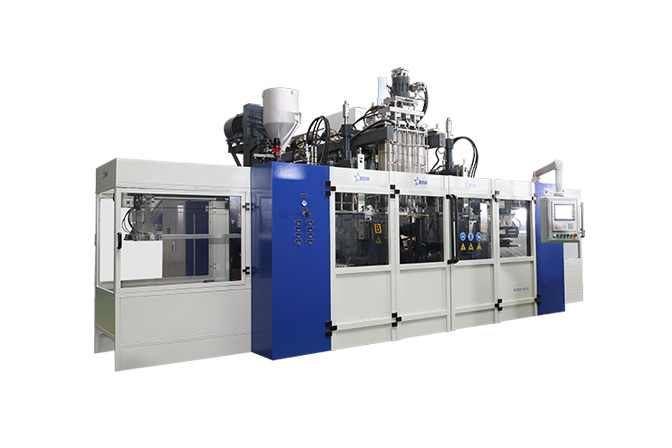 Blow Molding Machine Fundamental:
The automatic air ring structure adopts a double air outlet method, wherein the air volume of the lower air outlet is kept constant, and the air outlet is divided into a plurality of air passages, each air passage is composed of a wind chamber, a valve, a motor, etc., and the motor drives the valve to adjust the air passage opening. Degree, control the air volume of each air duct.
During the control process, the film thickness signal is detected by the thickness measuring probe and transmitted to the computer. The computer compares the thickness signal with the current set average thickness, and calculates the thickness according to the thickness deviation and the curve change trend, and controls the motor to drive the valve to move when the film is biased. When thin, the motor moves forward and the air outlet is closed; on the contrary, the motor moves in the opposite direction and the air outlet increases. By changing the air volume at each point on the circumference of the air ring, the cooling speed of each point is adjusted, so that the lateral thickness deviation of the film is controlled within the target range. .
Blow Molding Machine Control plan:
The automatic wind ring is an online real-time control system. The system is controlled by several motors distributed on the wind ring. The cooling airflow sent by the fan is distributed to each air channel through the constant pressure of the air ring air chamber, and the motor drives the valve to open and close to adjust the size of the air outlet and the air volume, and change the cooling effect of the film blank at the die discharge. Therefore, the thickness of the film is controlled. From the control process, there is no clear relationship between the thickness variation of the film and the amount of motor control. The thickness and thickness of the film and the different positions of the valve vary nonlinearly with the control amount, and each valve is adjusted. The influence on the adjacent points is very large, and the adjustment has hysteresis, so that the different moments are related to each other. For this highly nonlinear, strong coupling, time-varying and control uncertainty system, the exact mathematical model is almost impossible. Establishing, even if the mathematical model can be established, it is very complicated and difficult to solve, so that there is no practical value, and the traditional control has better control effect on the determined control model, but the control effect is very poor for highly nonlinear, uncertain, and complex feedback information. Even powerless. In view of this we have chosen the fuzzy control algorithm. At the same time, the method of changing the fuzzy quantization factor is adopted to better adapt to the change of system parameters.